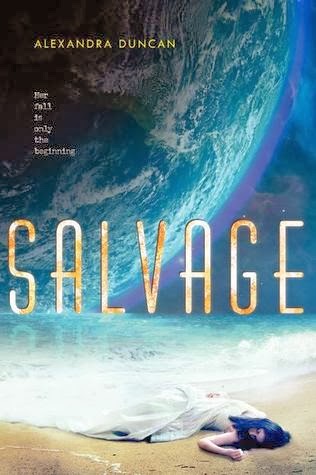 When Alexa Duncan told me that her book had been shelved on a "slut shelf" in GoodReads, I was...shocked.

Ava, the main character of Salvage, has sex, yes. Once. With a man she thought she would marry. And that--that?--made her a slut?

Consider, for a moment, Hunger Games. A novel where, literally, children kill other children. There's no other way to look at this: a society has promoted, encouraged, and forced a group of children to attempt to kill each other, and they do, graphically.

This book is sold in Scholastic book order forms distributed to schools. The publisher recommends the title for children aged 11-13. The movie is rated PG-13.

You know what's not in Hunger Games? Sex of any kind--there's hardly even a kiss.

Sex is the golden taboo, the one thing that, if included, moves a book past the pale. But why? These are conversations we should be having--not shying away from. Personally, I'd much rather a teenager enter a mature, consensual, healthy sexual relationship than a blood-soaked arena where only one person will make it out alive.

I'm not saying Hunger Games is bad. On the contrary, I think it's brilliant. And I'm not saying that children shouldn't read Hunger Games--I am all for people reading the right books for them, and I think there are many powerful messages in the context of the violent storyline.

What I'm saying is, the line should not be between violence and sex.

You can read Alexa's full post here; as usual, she's brilliant. She's also giving away a huge prizepack of books (including a signed AtU!) to encourage people to discuss what this trend of slut-shaming books means to our society as a whole. Additionally, for every person who enters the contest, Alexa will donate one dollar to the Freedom to Read Foundation (up to $1,000), so please spread the word!
Posted by Unknown at 2:06 AM